“Thank you for playing your part in this diverse and inspirational community. We can be proud of our work to put songwriters and composers centre stage by celebrating your achievements, campaigning for your rights, widening access to a career in the creative industries and helping to create new connections.” Graham Davies, Chief Executive

We recognised the most outstanding songwriting and composing for screen at The Ivors.

“Being recognised by other songwriters and composers is the best feeling and the most important praise.” Laura Mvula, Ivor Novello Award winner

Naomi Kimpenu won the Rising Star Award in an all female-shortlist and capped off a stellar year by securing a worldwide publishing deal with Sony Music Publishing UK.

The second Ivors Week was an incredible celebration of songwriting and composing that brought the music industry, fans and music creators together in support of our charitable Trust. Sam Ryder joined Nada and our Youth Network for Behind the Songs, Ray BLK and Jack Garratt took part in the David Ferguson lecture exploring music and mental health and we explored how music creators can ensure they get credited and paid through accurate song data. 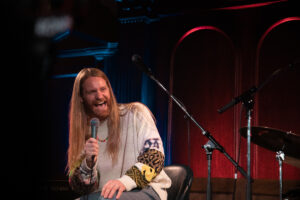 The 20th edition of The Ivors Composer Awards celebrated the most inventive and accomplished composition for classical, jazz and sound art. Seven out of ten of the winners received an award from the Academy for the first time – Brett Dean, Joanna Marsh, Liz Dilnot Johnson, Tori Freestone, Laurence Crane and Hannah Conway and Talvin Singh. We honoured the achievements of Judith Weir with Fellowship of the Academy and recognised Sir George Benjamin with an Ivor Novello Award for Outstanding Works Collection.

Watch all the winners and behind the scenes at The Ivors Composer Awards on Stabal TV.

We launched Ivors Composer Week to celebrate 20 years of the awards. A survey of Ivor Novello Award-winning and nominated composers demonstrated the importance of state school music education to their careers. Academy Fellow Julian Joseph and award-winning composer Charlotte Harding joined MPs, peers, composers and the ORA Singers at Parliament to launch the celebrations. During the week we explored how classical composers are using digital technologies, how commissioning practices are changing and what inspires acclaimed composers Ayanna Witter-Johnson and Cleveland Watkiss.

“Uniting as a community to ensure fairness and respect for all music creators is our steadfast purpose. Our rights must be protected and our profession respected. With trying economic circumstances and a time of uncertainty ahead, know this, The Ivors Academy has got your back.” Tom Gray, Chair

Through campaigns and lobbying, we continued making a strong and passionate case for the rights of all music creators. We have been part of a series of working groups held by the Intellectual Property Office looking at issues raised by the DCMS Select Committee inquiry into streaming including contract transparency and data.

The Competition and Markets Authority’s final report on the streaming market found that consumers have never had it so good and the difficulties that songwriters, composers and musicians are experiencing are not the result of how firms compete in the market. They referred the responsibility for policy interventions back to the Government, where our lobbying continues. The urgent need to find solutions to remuneration so that songwriters are paid fairly through streaming was raised by our Chair Tom Gray, when he spoke to the DCMS Select Committee one year on from their inquiry.

Our Composers Against Buyouts campaign with the Musicians’ Union raised awareness and galvanised action by calling out Moonbug Entertainment’s coercive commissioning practices, helping media composers to develop their negotiating skills and we ended the year by securing a debate in Parliament where buyouts were described as a “pernicious practice”.

Credits Due continued raising awareness of the need to capture song metadata at the point of recording so music creators are properly paid and credited. We launched Composers Under Pressure? – a new campaign to explore the pressures facing classical composers and how we can provide, and lobby for, more support. And we submitted evidence to the Misogyny in Music inquiry and pushed back against the Government’s proposed changes to how Artificial Intelligence can be used to data mine music and songs for commercial gain.

“I learnt more in three weeks at TheWRD from The Ivors Academy than I did in three years at Uni. Studying TheWRD was the best decision of my life.” Amosa, student

To widen access to a career in music and the creative industries we launched TheWRD from The Ivors Academy. TheWRD is an Access to Higher Education Diploma in Creative Entrepreneurship, unveiled by Ivor-winning songwriter Jamie Hartman and Oscar-winning producer Paul Epworth in May.

Uniquely the course starts with industry expertise, which is used to create high-quality creative education, provided by expert educators with cutting-edge technology. The first group of students began in September with a second intake in January 2023. There are industry-funded Ivor Novello Scholarships and we have brought the course to aspiring creatives in Gloucester and the North East with our partners Music Works and Generator.

“I can see the potential pathways that TheWRD could open up for me and that does not look like anything I thought would be possible without the programme. Due to disability and limits that are put on me elsewhere, it feels like TheWRD wants to let me fly.” Andy Skinner, the first Ivor Novello Scholar

Over the year four emerging talents had an immersive experience of the music industry through Inside Track with Ivor Novello Award winner Cassell the Beatmaker and In The Making. Participants got to write and produce two tracks, collaborate with producers and songwriters, and perform at Inside Track Live.

Our new leadership development programme, In The Room, launched in 2022. Led by under-25 Board Directors Imogen Williams and Hope Winter, it provides music creators aged 18-24 with opportunities to develop their leadership skills and carry out research into the issues that matter to them in the music industry.

We also launched our Advocacy Accelerator to increase diversity and representation on influential music industry boards through experience on the Academy Board, mentoring and training.

“Songwriters and composers are the most important creative force in music and The Ivors Academy’s mission is to empower you.” Cathy Dennis, Ivor Novello Award winner and Rising Star Award mentor

We published our second pay gap report which shows we are nearing gender pay parity, with our ethnicity pay gap providing a focus for positive action. In 2022 we reviewed our recruitment policies, provided diversity training and launched a staff mentoring programme. Next year we will continue reviewing our recruitment policies, supporting staff with training and mentoring, and will strengthen the policies to support and invest in our team, such as flexible working, annual leave, parental leave and support for wellbeing.

“Music and its surrounding industries is built on the talent and work of composers and songwriters; The Ivors Academy both acknowledges and encourages this through recognition, high quality exposure and connecting these brilliant creatives with one another.” Julian Joseph, Fellow of The Ivors Academy

We are increasing the support we provide to members to start and sustain successful careers. This year nearly 120 pairs of mentors and mentees took part in the Co-Pilot Mentoring scheme from Help Musicians with the Academy and Universal Music Group. This peer-to-peer support helps music creators take their careers to the next level and provides opportunities to give back as a mentor.

Events throughout the year meant that members could connect and find out about a wide range of topics including common legal issues, coaching, pricing your work, negotiating, looking after your mental health, funding, commissioning and what inspires some of the most exciting composers and songwriters working today.

We are adding more and more to the members’ area where you can watch panels with classical commissioners, music supervisors, funding experts at Help Musicians and with Soundcloud about their fan-powered approach to royalties.

Next year we will run more member events, create more guides and resources, and provide more help with funding applications, contracts and legal topics to give our members more support and opportunities than ever.

To help connect members across the UK we’ve established Councils in Scotland, Wales and Northern Ireland and will be rolling out Networks that members can join in 2023. And to give more for less, we launched a discounted joint membership with the Music Producers Guild, as well as with the Musicians’ Union.

From The Ivors Academy, a massive thank you to all our members and to everyone who gives their time, energy and passion as Board Directors, Trustees, Senators, Council members and staff. None of this would have been possible without you.