“Songwriters need a raise!” Nile Rodgers speaks about the sustainability of the songwriting industry

On Thursday 8 August Ivor Novello Award-winning Nile Rodgers and legendary manager Merck Mercuriadis shared insights into the craft and business of songwriting, at an event held by Songwriting Studies at The Ivors Academy. 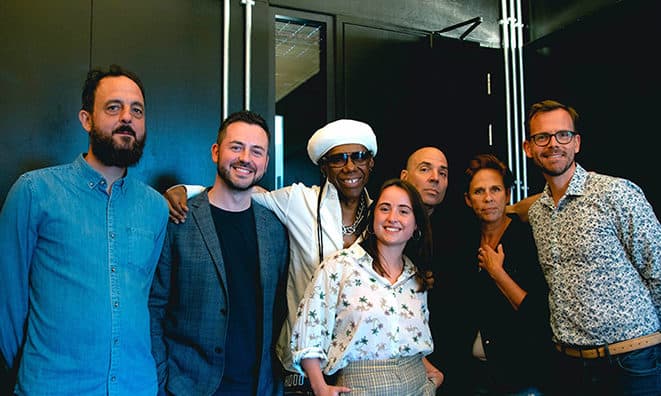 The pair stunned a room full of songwriters and academics as they emerged as special surprise guests as part of the event, delivering an intimate Keynote discussion led by Songwriting Studies project leader Dr Simon Barber.

Merck Mercuriadis opened the conversation by exploring the changing world of music publishing, expressing his growing concerns around the structure of how songwriters currently get paid. His company Hipgnosis Songs Fund, which is listed on the London Stock Exchange, plans to revolutionise the industry by “changing songwriters’ position in the economic equation.”

As founder of the music copyrights investment company, he explained how the Fund has been set up to ensure songwriters get a fairer and better deal. “There needs to be disrupt and someone with financial leverage” he states. “We all have to come together and we have to be aware that there is change in the air.”

Discussing the role of the modern day music publisher, Mercuriadis questions it as a term that is becoming less relevant, based on the description that a publisher collects your money but doesn’t necessarily add value to the song. “I want to replace the term ‘publisher’ with the concept of ‘song management’. The song is the foundation and I want to manage them like they’re living, breathing humans.”

Nile Rodgers was quick to share and support this vision, highlighting that songwriters provide the most important component in the success of popular music and need to be rewarded to a much greater extent. “Songwriters have only had two raises in 75 years. We need a raise, just give us a raise!” He continued to enlighten the audience by explaining how the world views the creation of music differently today, referring to the online global community as having “the world as their audiences”. This, alongside new gate keepers Rodgers argues, has paved the way for a new wave of business models fit for songwriters.