Nominations Announced for The Ivors 2019

We are delighted to announce the songwriters and composers nominated for the 2019 Ivor Novello Awards. 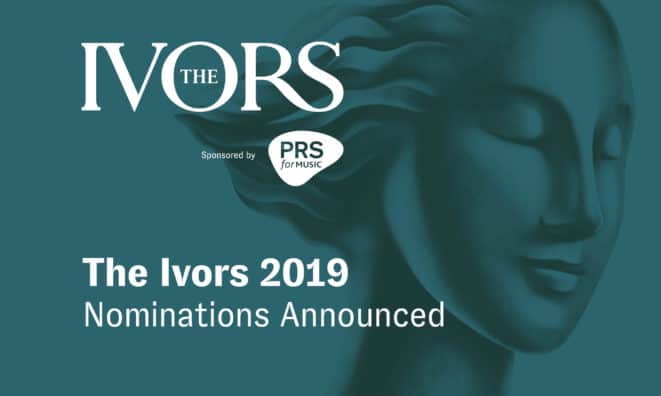 The Ivors, now in their 64th year, celebrate, honour and reward excellence in British and Irish songwriting and composing across categories for songs, album, film, TV and video game scores. The ceremony will also present Ivor Novello Awards that recognise music creators for their wider contribution to British music.

Music creators nominated to receive an Ivor Novello Award in a judged category are chosen by panels of songwriters and composers, representing true peer recognition.

The nominations for PRS for Music Most Performed Work credit songs having received the most broadcast, online and general performances in the calendar year ending 31 December 2018.

Works eligible for this year’s awards were commercially released in the UK in 2018 and have a British or Irish songwriting or composing contribution of at least a third.

The nominations for The Ivors 2019 represent the work of 48 individual songwriters and composers, 70% of whom are nominated for the first time.

The Ivors Academy Chair, Crispin Hunt, says “The works nominated for The Ivors 2019 are brilliantly diverse, and we’re delighted to see so many first-time nominees recognised. As the only peer-nominated music award in the country, they are a fantastic reflection of the exciting emerging talent of British & Irish music creators today. Our congratulations to all nominated.”

The Ivors are sponsored by PRS for Music.

Click Here to find out who is nominated for the 64th Ivor Novello Awards.