Ahead of The Gold Badge Awards on Friday 19th October, we meet inspirational conductor, composer, trombonist and singer, Scott Stroman, who will be collecting an Award in recognition of his work. 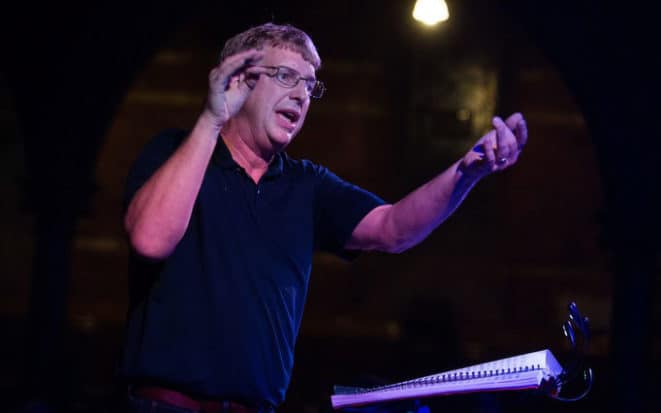 How do you feel about receiving a Gold Badge Award from the songwriting and composing community?

“It’s a great honour to be recognised by one’s peers. I’m very humbled.”

What has been the most pivotal moment in your career?

“The most pivotal moment came in Miami on New Year’s Eve 1983, when as a 23-year old I was playing trombone for Liza Minnelli. In the dressing room I observed that the band, all excellent players, were older than me, and realised that as pleasant as this was, I would never be satisfied to be here at their age. From that moment I set out to go to New York, or better, to Europe. I won a grant from the Rotary Foundation to study in London and the rest is history.”

Which person has been the most influential figure in your career and why?

“Though there have been very many, in hindsight the most influential was probably my cousin Brad Huff. Growing up in the same small town in Indiana but three years older, he was the tail end of the Vietnam generation, passionate and rebellious, and became “the” local rock drummer, turning me on to prog rock and fusion. Brad was a totally self-taught, itinerate musician and yet gave me huge encouragement as I pursued a path through formal education—a ying to my yang. He had the wits and courage to make his way to Denver, LA, Nashville, and eventually to Europe as an outstanding prog rock drummer, singer, guitarist and songwriter, full of life and discovery until his death from cancer in Prague five years ago. He accumulated few worldly possessions but untold musical ones, loads of loyal friends, and was my surrogate big brother.”

What one piece of advice would you give your young self, starting out in music?

“Have confidence in your feelings and beliefs, but be open to challenge. Prepare as best you can, trust yourself, and go for it with an open mind and open ears. Listen.”

You are a passionate educator and inspirational advocate for the genre of Jazz, what makes you positive about the future of jazz music education?

“The music itself, endlessly engaging. If it contains something inherently appealing, people will pursue learning about it. The “jazz way” is inherent in human nature and will always be there; all we can do is encourage it. What we see today is that loads of excellent young musicians are genuinely engaged by the music.”

As a prolific composer and arranger, how do you feel your Jazz background and improvising skills informs your compositions and arranging projects in other music genres?

“The short answer is the same as it did for Bach, Beethoven, Ellington, Mingus, Gil Evans, Kenny Wheeler and all my writing heroes. Working in jazz means speaking the language of the music, including internalising its harmonic structure, rhythmic language, and melodic references and doing it in time, in performance. It also requires detailed listening and spontaneous, creative response. Composing and arranging is a slowed-down version of the same thing while also offering the benefit of hindsight. Western classical music, at the same time, offers intriguing models of formal structure and architecture. I respond to all of it and have always been drawn by curiosity to be musically multi-lingual.”

You are a great supporter of inclusion and participation in music and singing is perhaps the easiest way for most people to practically engage with music. Where do you find the inspiration for your stunning vocal projects?

“I can clearly remember the first time I sang in a group as a little boy. I wasn’t even sure if I could sing, but the director made it so much fun that I was swept away. She offered me a teeny little solo and I jumped at the chance–it was one of the defining moments of my life and I’ve kept searching for that “tingle factor” ever since. I find it all over the place, in many cultures. I just want everyone to experience it.”

“I’m not sure I can be objective. Though our roots are in the US, my wife Sue and I love living and working in the UK and have raised our family here. Both countries provide great opportunities but also great challenges. What I do know is that from the moment I arrived in London in 1984 I’ve felt nothing but warmth, encouragement and constant inspiration and I’ve tried to return the favour.”

The 45th Gold Badge Awards are presented by BASCA and sponsored by PPL and PRS for Music, taking place at The Savoy in London from 11.30am to 4.30pm on Friday 19th October.