Ahead of The Gold Badge Awards on Friday 19th October, we meet composer, arranger, producer and former Head of Music at the National Theatre, Matthew Scott, who will be collecting an Award in recognition of his work. 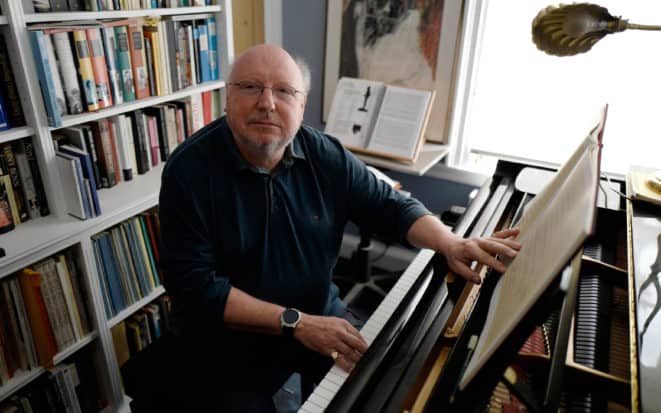 How do you feel about receiving a Gold Badge Award from the songwriting and composing community?

“I’m very flattered and if I’m honest, I’m as pleased as Punch, especially because the award was voted for by colleagues rather than members of the general public. It’s recognition for a branch of musical activity which normally passes unacknowledged.”

What has been the most pivotal moment in your career?

“It’s hard to choose a single one because there seem to have been so many. I suppose that the conversation I had with Lottie Lenya in New York in 1980 on the way to the airport to fly back to London, which steered me from academia into the music industry was pretty extraordinary, if only because her advice was the opposite of everybody else’s. She saw that I was happier in the rehearsal room or theatre than in the library or archive which was surprising given my CV up to that point.”

Which person has been the most influential figure in your career and why?

“I’ve always tried to get involved in as many different areas of music as possible, so the list is long and very varied, stretching from Sister Bliss to John Berger, via Harrison Birtwistle and Christopher Logue. It would probably be Steve Hawes, who gave me a wonderful start at Granada with the drama series “Floodtide” in a fantastically generous gesture of faith, or Jeff Wayne, for whom I worked as a copyist and who gave me the nerve to grab it with both hands. In theatre, both Dominic Muldowney and Peter Hall took me seriously on the strength of frighteningly little evidence, and I hope that I’ve gone some way to repaying their faith.”

What one piece of advice would you give your young self, starting out in music?

“I wish that I’d had the confidence to believe that I could earn a living in music and that I hadn’t been obsessed by that paranoia. I have followed my own advice by trying to do anything offered that was physically possible, and to learn from every project, be it triumph or disaster, but I’m still haunted by my imaginary epitaph: that I did the best I could with what I was given.”

You are an extremely successful composer in your own right, across a broad spectrum of theatre, film and TV works. What advice would you give to composers who want to write for various forms of media, or perhaps to someone who is trying to branch out of one form into another? Are there challenges to diversifying and broadening what you write for?

“The satisfaction is very different from the sense of fulfilment which is open to colleagues who are more successful in a narrower field of endeavour. I don’t know if it’s better or more fulfilling than the alternative and I think it’s a bit late to find out! Working with Harry Birtwistle made me very aware of the limits of my imagination in the field of experimental music for the concert hall, but I don’t feel cheated or belittled by my very limited profile in concert music, and I have very little work unperformed. But I would have liked to have done more feature film work I suppose although I see friends under the most enormous stress sometimes and I wonder… There is a lot of mutual suspicion in the various branches of the industry, most of it unjustified: my theatre work makes it easier for me to read and visualise from script or screenplay, but makes me aware of the size of gestures which are allowable in theatre but are wildly inappropriate in music for the screen, particularly in television.”

As Head of Music at the National Theatre, you supported and inspired a host of composers working on productions there. What are your top tips for aspiring composers hoping to land a project as part of leading theatre production?

“If you get an interview for a theatre project, try to absorb the script in as much detail as you can beforehand. Directors’ abilities to discuss music vary very widely: they are all aware of the contribution that music can make, how powerful and immediate an impact that music can have and they want all of that but are sometimes reluctant to delegate the control of it to someone else, least of all to a composer whose ability as a self-salesman is very often in direct contrast to his or her compositional talents. I have come to the conclusion that almost any problem can be resolved by discussion, by meaningful communication, and I devoted a lot of time and energy to keeping the channels open and the conversation flowing during my time at the NT. Showreels are useful but few people know how to listen to them, in my experience – they tend to search for exactly what they want to hear, rather than try to detect the wider aesthetic outlook of the composer. Again there are some who are very good at this once encouraged, while there are others who need the advocacy of others.”

How did your project conducting and arranging for Faithless come about?

“I was asked by the London Sinfonietta to make an orchestral realisation of the piece that Ayalah Bentovin (aka Sister Bliss) had composed for the Fuse Festival in Leeds, after I had reconstructed the Sergeant Pepper album for the Milan Festival, with an amazing line-up of guest vocalists including Marianne Faithfull and Jarvis Cocker among others, and had reworked some Kurt Weill orchestrations for Anthony Hegarty and Martha Wainwirght at the Meltdown Festival. Blissy and I worked very happily together and she later invited me to join the band in Moscow for their appearance as part of the Smirnoff Festival, which came in the middle of their world tour. I enjoyed the experience despite the very short rehearsal time and had a wonderful time working with an orchestra of young Russian musicians, although I wish now that I’d been a bit braver and flamboyant in the arrangements. I got obsessed with the problems posed by the lack of rehearsal and collaboration time and focussed on the problem of synchronising orchestra and the band; of course the combination of the very rhythmic nature of Faithless’ music and the orchestras familiarity with the material beforehand meant that no such problem existed, and the performances went very smoothly. I’d love to do some more with more time for developing a sound; I have always enjoyed projects in the rock industry but my academic air, which means that I always look like a Vicar caught in a raid on a brothel, doesn’t make me the natural choice, I guess!”

The music in a theatre production or in a film is often said to be the ‘forgotten’ or ‘unappreciated’ character. How do you view the role of music and your work in the context of the films and theatre productions you’ve worked on?

“This isn’t something that has ever worried me very much because there are so many things that only music can do. It can communicate information in so many areas simultaneously and instantly: period, location, plus then myriad delicate variations of mood, aspiration, irony etc. and I have always been aware of the responsibility that accompanies its invention. I come from a largely medical family and I used to envy doctors because they never have to question whether their work is helpful or not; I no longer worry because I now realise how consistently helpful music is. Without wishing to sound gooey or impossibly cheesy, I feel very lucky to still be open to both the tears and the blasts of elation after all these years.”

The 45th Gold Badge Awards are presented by BASCA and sponsored by PPL and PRS for Music, taking place at The Savoy in London from 11.30am to 4.30pm on Friday 19th October.