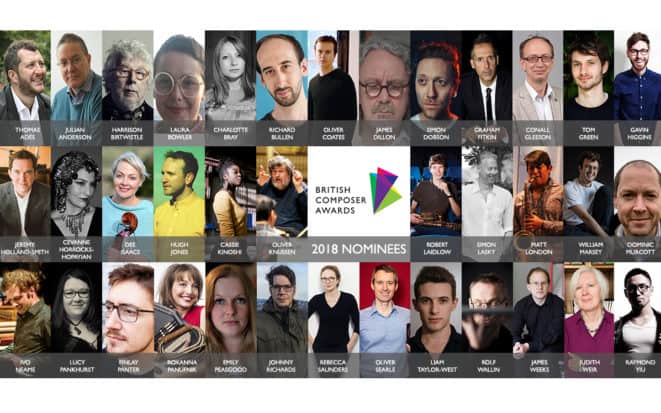 Highlighting the diversity and vibrancy of contemporary composition in the UK today, the 2018 British Composer Awards nominees include: numerous works demonstrating the ways in which today’s composers give a voice to marginalised groups in society; compositions inspired by poetry and other artforms such as visual art and literature; and works that breathe new life and meaning into history.

Nominees giving a voice to disenfranchised groups in society include: a work by the world’s only ‘recovery’ orchestra (Conall Gleeson), composed and performed by an orchestra in recovery from drug and alcohol addiction; an opera reviving forgotten music by history’s overlooked female composers (Tom Green); and music composed for disabled performers (Oliver Searle; Liam Taylor-West).

Compositions taking inspiration from poetry and other artforms include: a piece drawing on world music and Indian poetry to build musical bridges between cultures (Roxanna Panufnik); a reimagining of The Rime of the Ancient Mariner to apply to refugees in the world today, first performed by children who are refugees themselves (Dee Isaacs); and a brass band composition based on coal mining strikes and inspired by poet Mervyn Peake (Gavin Higgins).

Nominated composers reinterpreting and breathing new life into history include: a brass band piece inspired by the life of Alan Turing (Simon Dobson); an orchestral work exploring the notion of ‘Deep Time’ through music (Harrison Birtwistle); a sonic art installation celebrating the rediscovery of a forgotten Baptist Burial Ground (Emily Peasgood); and a full-length string concert inspired by the North Sea Flood of 1953 (Oliver Coates).

A record-breaking year for entries, 2018 saw over 560 submissions, demonstrating the volume of quality new music being composed and debuted in the UK. This year all categories have been judged anonymously for the first time, and a second jazz category has been added. In 2018 51 per cent of the composer are aged under 40, and are first-time nominees.

The British Composer Awards are presented by BASCA and sponsored by PRS for Music. The event is in association with BBC Radio 3 providing exclusive broadcast coverage.

Crispin Hunt, Chair at BASCA, said: “In this record-breaking year for entries, BASCA is delighted to celebrate the breadth of works for the British Composer Awards, representing a wealth of UK talent. As ever it’s hugely exciting and inspiring to see the fresh passion represented by our first-time nominees. Congratulations to everyone nominated today.”

Nigel Elderton, PRS for Music Chairman, commented: “I am delighted for PRS for Music to once again be supporting the British Composer Awards, with its impeccable record of recognising the best contemporary classical works. It is inspiring to see that over half of this year’s nominated composers are aged under 40 and first-time nominees, showing that the UK classical music landscape is truly continuing to flourish. Congratulations to you all and I look forward to celebrating with you at the ceremony in December.”

Alan Davey, Controller BBC Radio 3, added: “Broadcasting the outstanding work of composers from across the UK – throughout our schedule – is an intrinsic part of our role to connect audiences with remarkable music and culture. We look forward to sharing highlights of this year’s awards and some of these marvellous new compositions on the station.”

Celebrating the art of composition and showcasing the creative talent of contemporary composers and sound artists, the winners in each category will be announced at a ceremony at the British Museum in London on Tuesday 4 December 2018.

Presented by BBC Radio 3’s Andrew McGregor and Sara Mohr-Pietsch, the ceremony will include a performance in memory of nominated composer, Oliver Knussen and the presentation of two Gift of BASCA awards – the British Composer Award for Innovation and the British Composer Award for Inspiration, presented in association with the Music Publishers Association.

Amateur or Young Performers
Works for voluntary, amateur or youth choirs and ensembles
• Fiery Tales by Richard Bullen
• Microscopic Dances by Oliver Searle
• The Caretaker’s Guide to the Orchestra by Jeremy Holland-Smith

Choral
A cappella or accompanied, except works for choir and orchestra
• In the Land of Uz by Judith Weir
• Mielo by Raymond Yiu
• Unending Love by Roxanna Panufnik

Stage Works
Works specifically written for the stage, including opera, dance and musical theatre
• Shorelines by Oliver Coates
• The Exterminating Angel by Thomas Adès
• The World’s Wife by Tom Green

Works eligible for the 2018 British Composer Awards must have received a UK premiere between 1 April 2017 and 31 March 2018. Works are also composed by a composer born in the UK or ordinarily resident in the UK.