Sir Harrison Birtwistle was a longstanding member of The Ivors Academy who won a remarkable 8 British Composer Awards and, in 2006, the prestigious Ivors Classical Music Award.

He was the Academy’s most awarded classical composer.

Here, members of the classical community share personal memories of the life and legacy of the great composer.

Around ten years ago, I first got to know Harrison Birtwistle – I visited him at his home five or six times at most, but the impact of these visits was immense. Harry was the most extraordinary mentor – honest, gentle, generous, supportive and hilarious.

He showed me his famous pebble from Aldeburgh beach. He talked about how Beethoven could disrupt an ostinato. We listened to Bach. Once, I baked him a cake. “Bloody ‘ell, don’t do that again…”

He taught me to compose from the inside – to focus on one detail at a time and to relish a slower process. And he said if I ever used the motor on a vibraphone he’d never speak to me again. Time spent with Harry was precious, golden time.

Sleep well Harry, a teacher and good friend to so many of us, who also cooked the best suppers and was the warmest, most generous and funniest company. 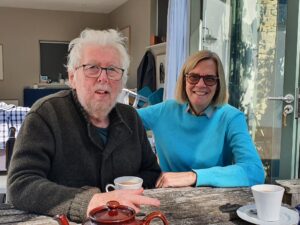 I first encountered the music long before I met the man. Seeing Punch and Judy in the 1980s was a life-changing experience; becoming Harry Birtwistle’s publisher in 1995 was wish fulfilment of the highest order.

It’s fair to say that our getting personally acquainted was not a linear process. Talking about music proved the least productive tack. Gardening, cooking, art – these were topics that got things flowing and unlocked a wealth of knowledge and insight. A particularly vivid memory was being guided by Harry around the big Anselm Kiefer exhibition at the Royal Academy of Arts before opening time – just the two of us in the galleries – having previously breakfasted together on kippers at the Garrick.

The arrival of each new Birtwistle piece was a source of excitement to me and my colleagues – another opportunity to explore afresh and to wonder at the extraordinary invention and unique sound world. Who else could have written a Moth Requiem and made it so evocative and memorable?

Although perpetually challenged by the complexity of Harry’s music, our editors enjoyed a special relationship with him – full of warmth and good humour: “Never again will we be treated to his homemade quince jelly or sausage rolls as regularly shared with us when he was dropping off a manuscript to the office on his way to watch the cricket.”

Harry was one of a kind and will be greatly missed by all of us (that chuckle!); fortunately, his music lives on.