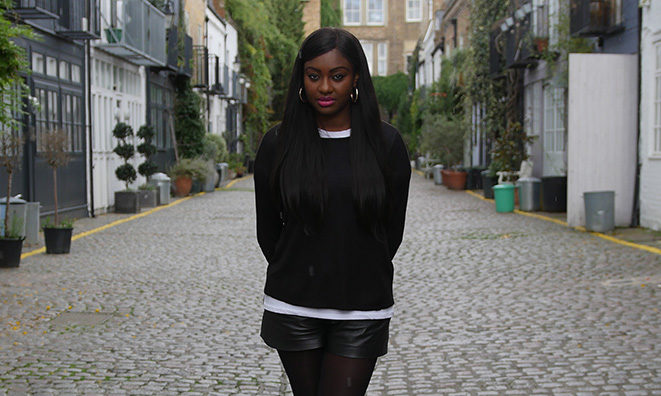 If you bump into Jin Jin walking down the street on her phone, there’s a distinct possibility she’s recording a top line she caught herself humming. As many songwriters and creators know, inspiration can strike at any time, so it’s important to capture ideas as soon as possible.

Because who knows? It could be another Hold My Hand in the making. Although Jin Jin had been writing professionally for a few years, it was this 2015 UK number one hit (co-written with Jess Glynne) that finally brought her international acclaim. Her first Billboard Hot 100 entry, it won her a BMI award in 2016 as well as her first Ivor Novello nomination in the same year. The song was also used in an advertisement for Coca-Cola in 2015 and was featured on the original movie soundtrack for Bridget Jones’s Baby.

Creating those elusive ‘hits’, however, is not what gets Jin Jin out of bed in the morning. Of the one hundred or so songs she writes each year, around 20 or 30 will be produced up properly – from that, two or three may reach the top ten. “It’s more important to focus on honing your craft,” says Jin Jin. “Create strong hooks instead of becoming too obsessed with writing a hit. Ensure you do the best that you can for the artist and song.”

A promising start
Jin Jin developed a knack for writing top lines from an early age – standing on boxes in her grandfather’s vinyl store in Manchester, singing pop songs over reggae beats. However, she also had a strong urge to perform. At the weekends she went to stage school and was cast in musical theatre roles, which included a West End production of Bugsy Malone.

She loved “tinkering around” on the keyboard her family bought her, but for years she only ever saw writing as a hobby, rather than a viable career option. Her perspective began to change when she enrolled at City College Manchester to do a National Diploma in Music Technology. Here, she wasn’t just mixing with performers – she met writers, producers, musicians, engineers, and DJs.

“It gave me a much more rounded insight into the business of making music, which I found a lot more interesting than I expected,” says Jin Jin. “And although I’ve never wanted to produce, it’s been helpful to have a sound understanding of studio technology throughout my career.”

It was also here that she met “an invaluable contact”, Simon Aldridge, who gave a talk to the students in her class one day. Jin Jin was particularly inspired by “all the amazing people” he’d worked with – Seal, Gabrielle, Pet Shop Boys and Wayne Hector are just some of the acts he helped to develop at Sony.

Opportunity knocks
Jin Jin took the opportunity to send Aldridge a few of her rough demos. He thought they showed unique potential, and started introduced her to writers and producers.

She describes her first studio writing experiences as “quite intimidating”. She found herself in a small room on Cable Street with about 15 MCs – including Wiley – hunched around laptops. But she found everyone “friendly” and her pop-enthused hooks and choruses were an interesting contrast to their work. It also exposed her to different styles and genres. And, although she wasn’t paid for the sessions, they taught her the discipline of songwriting on demand to a strict schedule.

At this point she still wanted to sing but realised she had a talent for writing lyrics and bars. “I began to take more of a backseat from performing,” she says. “Plus, the raps I came up with didn’t have quite the same ring in a Mancunian accent!” In 2008, she co-wrote the single Do Me Wrong with grime crew Roll Deep and began work on her debut single Sex in the City with producer Bless Beats. By this point though, she had “fallen in love with songwriting” and lost the “burning desire to be on stage”.

Since then, she’s gone on to collaborate with a wide variety of artists – from pop group Little Mix to experimental jazz band Polar Bear. Jin Jin particularly loves working in London for this reason – she feels there are more opportunities to “genre-hop” than in LA. “I prefer working with all sorts of styles and I hope to see more intriguing hybrids come out of that,” she says.

She advises songwriters to embrace this attitude too. “Don’t ever feel constricted to one particular genre – mix and collaborate as much as possible to keep your music interesting. For example, why not combine indie with grime?”

A principled approach
However, the principles of songwriting remain the same for Jin Jin, regardless of the genre she’s working in or the artist she’s collaborating with. “I like to focus on building rapport with the artist when we’re in the studio for the first time,” she says. “It’s important that I always ask them about whatever they’re going through and how they’re feeling.” She adds, “From that point on, we can capture a moment in the studio. We’re all there together to ‘get in the vibe’ and jam.”

It’s perhaps this inclusive and caring approach to her work that lies at the heart of many of her most successful collaborations. Her first studio session with Jess Glynne and Bless Beats followed this pattern. “Jess had just been out on a works-do, so I asked her to tell us about it – she recounted how she felt about the night through a melody,” recalls Jin Jin. “We then wrote the song from a loop of music that Bless Beats created, chopped up the best parts and stuck them together. It was disjointed but it worked.” “We felt particularly free as there was no one pressurising us to write a pop hit,” she adds.

Finding Jess Glynne
Glynne and Jin Jin have both contributed a lot to each other’s success. Yet it’s a collaboration that could easily never have happened. It was by chance that Access to Music in East London saw a video that Jin Jin had created with the London MC Mikill Pane. Jin Jin was unpublished and unmanaged but they asked her to go in and talk to the students. Afterwards, Jess, who was studying at the college, asked her to listen to her SoundCloud link. Jin Jin loved what she heard and so began their collaboration.

It’s for this reason that Jin Jin urges songwriters to reach out to musicians through social media and attend open mics. “It doesn’t matter how many hits someone has or hasn’t written – you could be sat in the room with the most ideal person for you to collaborate with,” she says. “So put yourself out there and create your own opportunities.”

Helping others
Jin Jin recognises that songwriters still need the help and support of people in the industry, acknowledging, “I wouldn’t be where I am today without them.” With that in mind she has started her own publishing company – Ragamuffin Music – with her business partner Bless Beats, to support new artists and writers. “We’re not interested in whether an artist has had hits or released music – rather we look for people with potential,” she says.

She is particularly excited about Dom McAllister, a “great talent”, who is already receiving national air play. As much as Jin Jin has turned her attention to helping others – she is also working on a project to help ex-offenders get into music – she’ll never stop writing or collaborating. Ryan Tedder, Chris Martin, Esther Dean and Chance The Rapper are just some of the artists on her wish list of collaborations. But she also receives a lot of inspiration and energy from new or unsigned acts. “I love going to live gigs and festivals to keep the ideas flowing. And every success I have just makes me want to work harder.”

Article first featured in The Works [2017]