We held the 46th Academy Gold Badge ceremony on Friday 11 October to celebrate a group of true music industry champions. 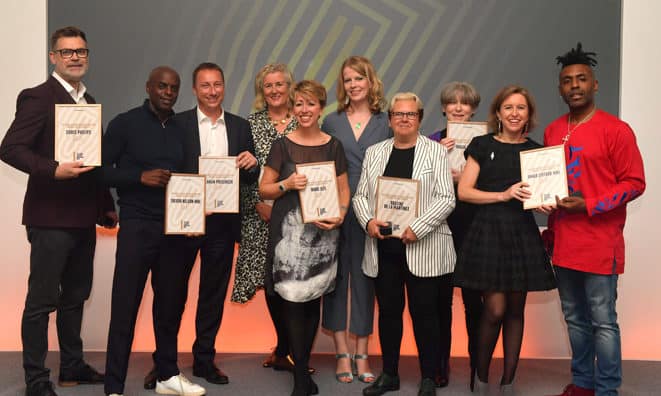 Our annual lunch returned to the iconic Savoy hotel in London this month to honour and give thanks to ten individuals who have worked tirelessly to support the professional lives of songwriters and composers in the UK. This year we were delighted to welcome a brand new host to the show, legendary broadcaster Edith Bowman.

Hundreds of guests from across the creator community, the music industry and members of the Academy gathered in the Savoy’s Ballroom as Gold Badges were presented to all ten recipients. Chair of The Ivors Academy Crispin Hunt opened the ceremony addressing the Academy’s ongoing campaigning work, with the introduction of a new campaign called Justice for Creators, calling for a fair share of streaming royalties for creators.

Amongst those taking home an acclaimed Academy Gold Badge were pioneering broadcasters from the worlds of R&B and Jazz, in recognition of their outstanding contributions to music.

Legendary BBC broadcaster Trevor Nelson MBE, whose Gold Badge was presented by four-time Ivor Novello Award winning songwriter and longstanding member of The Ivors Academy Craig David, spoke of his deep admiration for the creative craft, saying “I’m in awe of everyone of who can create a melody. As music creators doing what do you is amazing.”

Highly respected broadcaster Chris Philips received his Gold Badge by Jazz FM colleague and friend Ruth Fisher, who spoke of Chris’ generosity and dedication to the promotion of Jazz in the UK.

Exceptional pianists Nikki Iles and Thalia Myers were amongst this year’s winners, as well as singer, songwriter and artist Omar Lyfook MBE, honoured as a leading icon and true legend of British Soul.

Distinguished composer Odaline de la Martinez was praised by presenter Nicola LeFanu who spoke of the great gratitude she owed the composer. Throughout her career, Odaline has put a particular focus on shining a light on contemporary composers, especially female and under-represented talent.

Lohan Presencer was recognised for his exceptional impact on the dance music world and dedicated his Academy Gold Badge to talent he’s worked with during his time as both CEO and now as Chair of the Ministry of Sound Group. On receiving his Gold Badge, Lohan spoke of his enduring support of music creators, saying “We must make sure that artists and creators are fairly compensated for their work. They deserve to earn a fair living”.

Extended thanks is given to our sponsors PPL and PRS for Music, our host Edith Bowman and to Tom Hewson’s Trio for providing the musical performances and accompaniment.