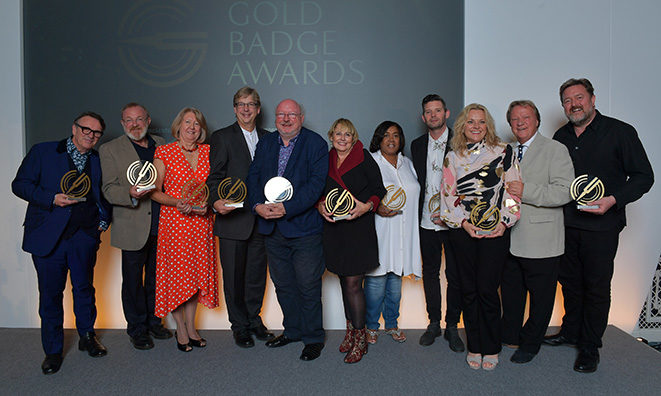 BASCA is delighted to announce 11 exceptional individuals who will collect a Gold Badge Award this October in recognition of their unique contribution to the creator community.

Presented by the songwriting and composing community, the Awards celebrate exceptional talent in the UK music industry; individuals who inspire or support creativity and the professional lives of BASCA members.

Now in its 45th year, more than 500 awards have been presented by BASCA to acknowledge the diversity of contribution, dedication and talent that exists within the music industry, recognised from the worlds of jazz and classical, film, television and theatre music, and songwriting. BASCA is also delighted to announce the award ceremony will be hosted by broadcaster (and previous Gold Badge Award recipient) Janice Long.

The 2018 Gold Badge Awards will be presented to:

Jackie Davidson, multi-faceted, award-winning music entrepreneur and manager. This award is presented in association with PRS for Music.

Guy Garvey, lead singer and lyricist of Elbow, renowned DJ for BBC Radio 6 Music and solo artist. This award is presented in association with PPL.

Sarah Rodgers, composer who has dedicated herself to championing music creators.

Nick Wollage, respected and sought after engineer working across a diverse collection of projects from major Hollywood film scores to individual artists.

Commenting on the announcement, Crispin Hunt, Chair of BASCA has said:

“The Gold Badge Awards always provide a fantastic opportunity and platform to recognise those who have achieved excellence in their chosen fields whilst contributing to the betterment of the wider musical community. This year’s list of recipients is full of inspiring individuals who we are honoured to celebrate.”

The 45th Gold Badge Awards are presented by BASCA and sponsored by PPL and PRS for Music. They take place at The Savoy in London from 11.30am to 4.30pm on Friday 19th October.